My husband is an Iron Man. He eats a vegan diet. Tempting as it is to connect these two facts and attribute his diet to his athleticism, I don’t. I learned that lesson the hard way.

I hesitate to make claims about the benefits of a plant-based diet. Yes, it has the potential to contribute to weight loss, promote good health and improve athletic performance. But vegans can be overweight, suffer from diseases such as cancer, heart disease and diabetes and be couch potatoes. Eating a vegan diet is not a panacea. But there is one claim I don’t hesitate to make. Consuming a vegan diet saves lives and reduces the suffering of sentient beings: calves, cows, chicks, hens, pigs, goats, fish and so on. Working to reduce this suffering is my passion.

So, Dan recently competed at Lake Placid Iron Man. It was one of the most phenomenal experiences of my life to join the thousands of other spectators on race day. In case you don’t know, the event consists of a 2.4 mile swim, followed by a 112 mile bike and then a 26.2 mile run! The competitors loop through the gorgeous village of Lake Placid many times during the course of the day. I had more than a half dozen opportunities to see him.

Here’s a picture of him at about 6 am, shortly before the start of the event. After taking it, I posted this picture on Instagram and made reference to the fact that Dan is a #meatfreeathlete, #poweredbyplants and a #vegantriathlete. I was regretting that decision later in the day. 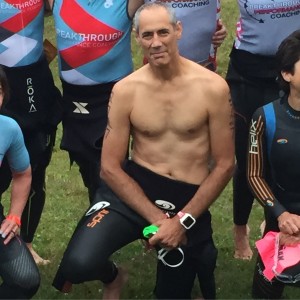 The race started at 6:45.The race organizers dialed in an awesome sound-track that provided the perfect backdrop for watching the athletes swim two huge loops around the lake. Dan had given me a list of his expected breakdown times. This allowed me to watch a portion of the swim and still make it over to the swim-to-bike transition arena to catch a glimpse of him as he was running running down the chute. 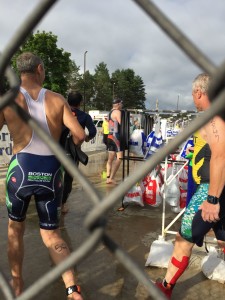 If you could see his face you’d know he was all smiles. He told me he felt great. I found a strategic spot to see him emerge on his bike and snapped this shot before he headed off for the first loop of his 112 mile bike ride. 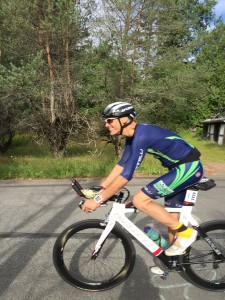 To give you an idea of the timing of the Iron Man, after he passed, I was able to jog a few miles back to the hotel, have a leisurely breakfast, catch up on emails, kayak around the lake and then jog back to town long before he returned from the first of two loops on the bike. That’s not to say he’s slow. In fact he was one of the fastest in his age group. It’s just that 50+ miles on a very hilly course is a challenging and time consuming endeavor. Anyway, despite making it back in time, I somehow managed to miss him on this first loop. Very sad! I made the decision after that to hang out with his Boston Triathlon Team (BTT) mates at the tent that they had set up on the bike and run course. Not only are they great company, but Dan knew to look for his cheering squad there. So I did catch him on the second loop. Here’s a picture of him waving, with the beautiful lake behind him. And then after that a shot taken by a professional photographer somewhere along the course. 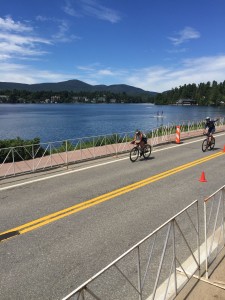 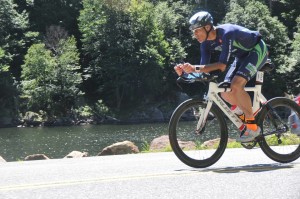 He was looking amazing. No surprise. He’s a very strong biker…of the three disciplines, the bike is his forte. After he passed, I dashed to the center of the town to catch him heading off for his run. He wasn’t expecting me to be there. I called out to him but he didn’t hear me. I noticed his face looked strained. I did finally catch his attention and he managed a smile and a wave. 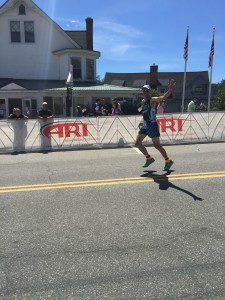 I couldn’t believe he had just finished a 2.4 mile swim, 112 mile bike ride, had been racing for about 8 hours and still had a whole marathon to go.

I made my way back to the team tent, generously stocked by his teammates with cold drinks and snacks. They had come up to Lake Placid the day before, camped out nearby and were there to cheer on Dan and other team competitors. So thoughtful, they told me they set up the tent for me and other family and friends to make spectating more pleasant. I was very touched by their kindness.

Here’s where things got stressful. I was watching Dan’s split times on the Race Organizer’s Website. So too were our daughters, his bike buddies back home, good friends, and our extended family. They were following him on the course via Internet and I was sending along pictures when I spotted him.

I was comparing his actual times to the projected ones he had scribbled down for me. His first split was as expected. He slowed down for his second. Not surprising this bit was pretty hilly.

But then it became clear something was up.

His next split showed he was averaging 15min/mile, way off his normal pace, even for this long endeavor. At that pace, he was either walking or jogging and resting for long periods. Thirty minutes after his expected arrival, he still hadn’t appeared.

A seasoned triathlete and friend of his coach reassured me that he spoke to Dan the night before and “his main goal is to finish this. And he will.” That news was super helpful. Next I spoke to a member of BTT who also happens to be a sports nutritionist. He was really salty when he went by on the bike. “I shouted to him to take some salt”, she told me. It was a hot day. Anyone that knows Dan, knows he sweats a lot, way more than the average athlete. Did he take that into account in his nutrition plan? Was that what was going on?

Shortly thereafter, I spotted Dan jogging along the course towards us. He looked weary. He slowed to a walk as he neared the tent. 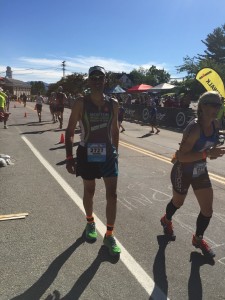 He explained that he’d been cramping up really bad. Super difficult to run, even hard to walk, he wondered if he’d need to drop out. “Dan, you need to replenish your salts”, I told him. He knew this and had been doing so. He continued on. If I could have run with him on my back at this point I would have.

Dan still had 13 miles to go. It was hard to know he was in so much pain. I knew he’d be very disappointed if he didn’t finish. And admittedly, I was sorry I had drawn attention to his vegan diet in my Instagram post. Look, it’s a grueling race for anyone. And a significant percentage of the competitors don’t make it to the end. But I feared, nonetheless, that his diet would be the scapegoat if he didn’t cross the finish line.

And then something wonderful happened. The next time he ran by, he was smiling, his coloring had improved and he said he felt much better. He wasn’t running fast, but he was running. 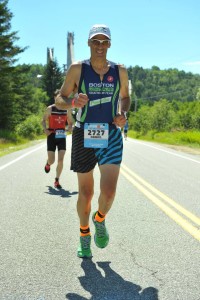 He had ten miles to go at that point but I sensed he was probably going to finish. I was over the moon and decided it was time to start celebrating.

By the time he ran by again, exhausted but beaming, with only a few miles to go, I was onto my third beer. As I made my way to the finish line, my phone was buzzing with texts from “spectators” following Dan from afar. My parents had figured out how to refresh their computer screen to get updated splits, so even they knew the end was near.

And then, there he was 13 hours, 26 minutes and 32 seconds after he first dipped his toe in the water that morning. 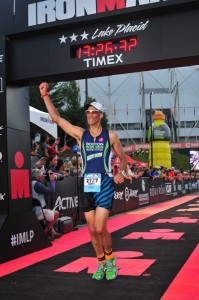 When I say that seeing Dan cross the finish line was one of the great highlights of my life, I am not exaggerating. My daughter face-timed me at the precise moment the announcer proclaimed, “Dan Goldman, you are an Iron Man!” She caught me crying tears of joy.

I learned an important lesson that day. Dan is a vegan and an Iron Man. Yes, his diet of plants may help him with endurance, recovery rate and cardiovascular strength. But had he achieved this feat because of his diet? Who knows? For sure, he proved that it is possible to complete an Iron Man on a diet of plants. But whatever health or athletic benefits he may get from consuming a vegan diet, one thing is certain. His diet benefits the planet and animals. And for that I am exceedingly grateful!

2016 Beantown Kitchen- Reprint only by permission of the author