Up until about a year ago, the thought that animals suffer in the food industry was only a vague notion and not forefront in my mind. I ate the standard American diet and didn?t question it as it?s normal, traditional, seems natural and certainly tasted good. I made efforts to purchase products with labels that indicated suffering was minimized…cage free, free range, humane and grass-fed.

My journey to veganism started with my love of elephants. I saw a posting on Facebook about the death of Lawrence Anthony a South African man who had dedicated his life to rescuing elephants from human atrocities and then rehabilitating them. 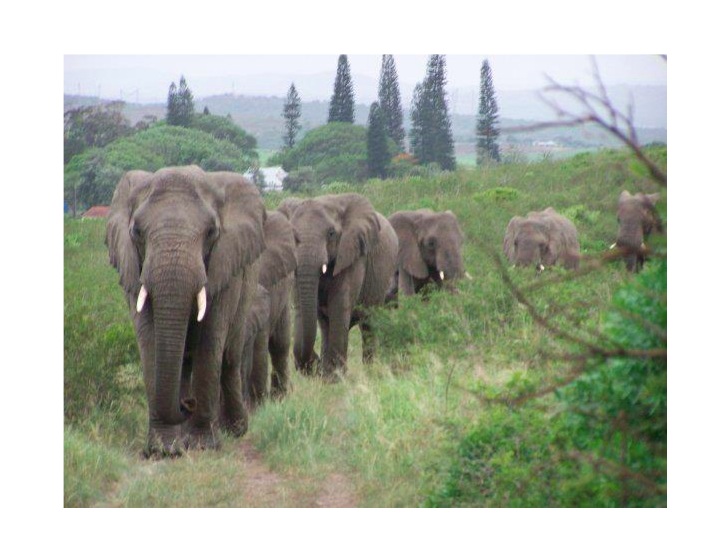 Two days after his death, 31 wild elephants, whose life had been saved by Lawrence Anthony, walked slowly in line trunk to tail for 12 miles to pay respects and mourn at his home. The elephants had not been alerted to the event nor had they been to his house in over a year but somehow knew their friend had passed. They kept vigil for two days and then left to make their journey home. This story and others leaves me marveling about the sensitivity and intelligence of these awe-inspiring creatures.

Around the time I read about this, I noticed that a friend of mine was posting on Facebook quite a bit about the cruel practice of poaching elephants for ivory and the orphaned babies that are often left behind. We met for coffee and she invited another friend who was an elephant lover as well. We discussed elephant poaching as well as many other ways that animals suffer at the hands of humans. I was only vaguely aware of many issues and I covered my eyes as they pulled up videos on their iphones. They were too painful to watch. However, after that, I made a decision to educate myself. I realized how much suffering takes place in the animal food industry and at the same time, I learned as Dr Cambpell states, ?there are virtually no nutrients in animal foods that are not better provided by plants.? Once I realized that it is not necessary to consume animals to be healthy, the next logical step for me was to stop eating animal flesh, eggs and dairy altogether.?? I will now share with you just a few of the areas where suffering takes place in animal food industry that particularly took me by surprise.

Some people wonder why I gave up dairy as it is not obvious how a cow suffers to obtain her milk. 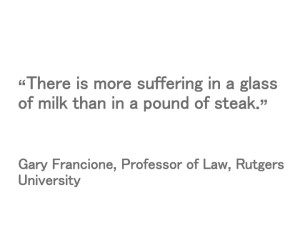 Animal rights professor, Gary Francione states “there is more suffering in a glass of milk than in a pound of steak?. What does he mean by this? Whether certified organic, humane, grass-fed or not, cows do not just magically produce milk and wait for kind farmers to come milk them to relieve them of it. Dairy cows produce milk for humans because they are artificially inseminated to become pregnant. Once they give birth, they begin lactating to feed their babies. But it is standard industry practice for their calves to be taken from them soon after giving birth sometimes days sometimes hours. All of the dairy and goat milk at Whole Foods is obtained this way. Why? If the calf drank her mother?s milk, there would be far less, and likely none, in her udders for humans to take, sell and consume.?This removal of the baby from his or her mother causes emotional trauma. 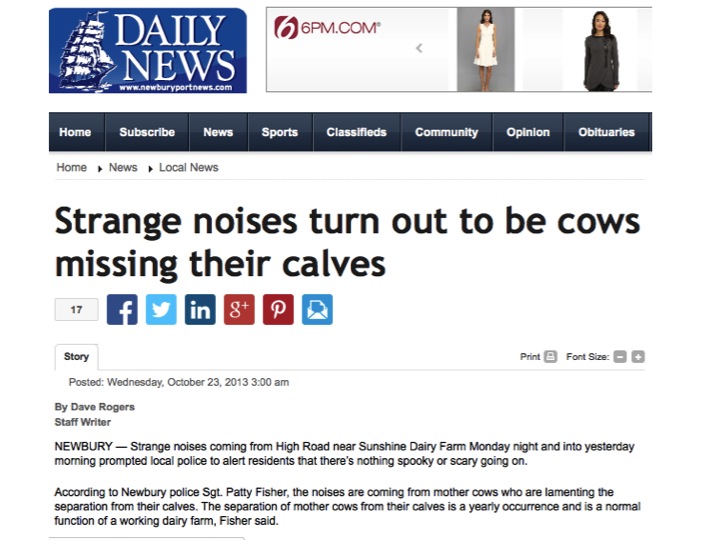 A few years ago an article ran in the Newbury Port News, a North Shore newspaper, describing inhumane noises coming from what sounded like creatures in distress at the local dairy farm. The cries were coming from mother cows grieving the loss of their babies. The local police sargeant explained that ?the separation of mother cows from their calves is a yearly occurrence and is a normal function of a working dairy farm.? When calves are taken, gates are locked to ensure mothers won?t escape looking for their babies. It is not uncommon for a mother who is not securely penned to trek for miles in search of her baby. 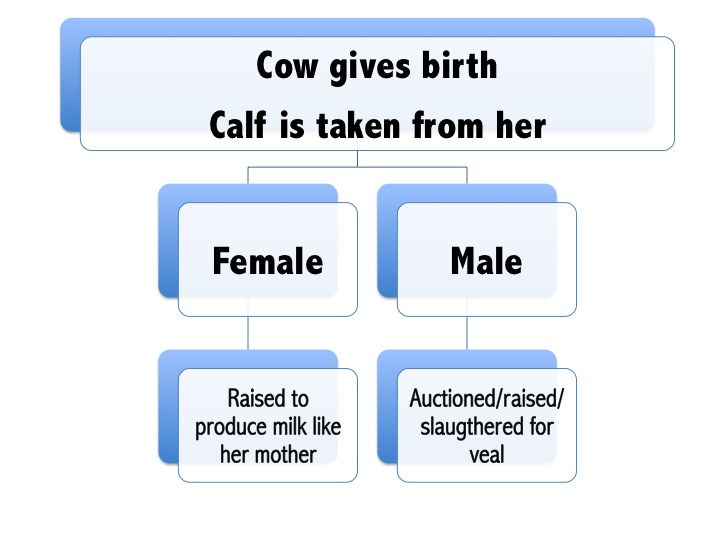 The female calves will be kept to become part of the insemination, pregnancy, birth, separation, and then lactation cycle like their mothers until they are ?spent? and slaughtered and turned into hamburger meat. The male calves have a different experience. They are not useful to the dairy industry (they are males and will not produce milk) and they are also not useful to the cattle industry as their flesh is inferior to ?beef? cows. So they are sent terrified to auctions and then once purchased kept in awful conditions to prepare their flesh to be sold as veal. 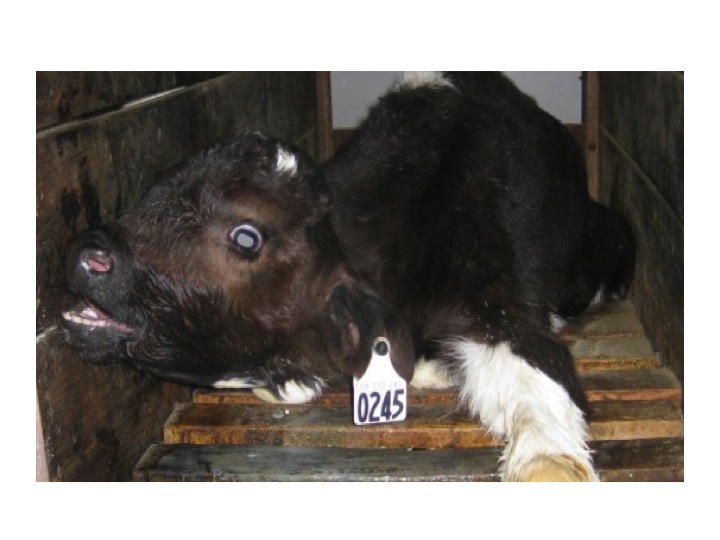 Undercover investigations frequently report brutal treatment of baby calves who are kicked and beaten, chained by the neck and locked inside narrow crates so small they can?t walk, turn around, or lie down comfortably. 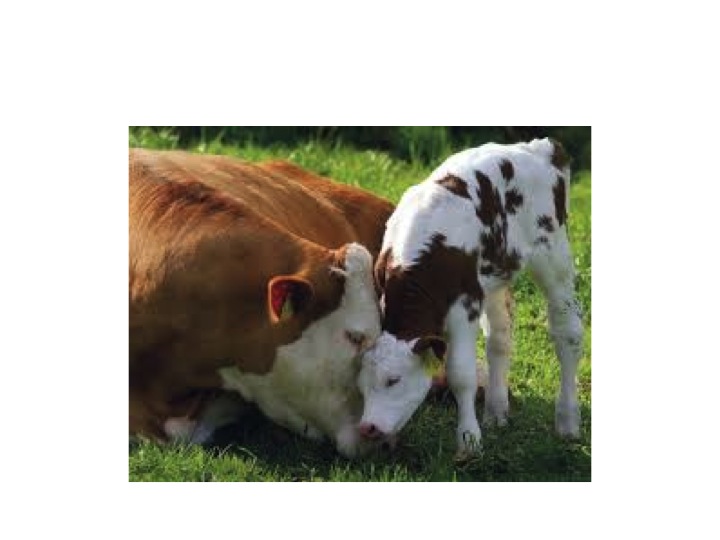 Dr. Holly Cheever, now with the Humane Society Veterinary Medical Association, was a large animal vet for many years. During her practice, she was called out one day to a dairy to try to solve a mystery. A farmer contacted her and said that one of his cows, who had recently given birth to a calf and should be producing milk, was returning to the barn each day with an empty udder. The farmer was stumped as to why she was not giving milk.

Upon arriving, the vet inquired about the cow and found out that she had given birth three times before without incident. Dr. Cheever was also puzzled, as there seemed to be no medical reason for the empty udder. She decided to return in the morning and follow the cow out to the field, as this lucky girl had the rare pleasure of daily access to a grassy pasture. Dr. Cheever followed her all the way to the edge of the grazing land where the grass met a tree line of forest, and there, in a thicket of bush and trees, lay a quiet baby calf awaiting her morning milk. The cow had given birth to twins, and in a heart-wrenching “Sophie’s choice,” had returned one to the barn, knowing full well that the calf would be taken from her, and then hidden the other, safely tucked in the trees, where she could come and care for her every day.

This remarkable act of compassionate motherhood demonstrates that she had the hindsight to remember that her previous calves had been taken from her at birth. She also knew that bringing back just one would satisfy the farmer, and then she could keep the other for herself, to nurture and love. It took planning, cunning, foresight, and courage–emotions and attributes normally thought only to be possessed by humans.

This, like the story I ?described earlier about the elephants, exemplifies ?how non-human animals have enormous emotional capabilities.

What about egg production how does that cause any suffering or harm to a hen? ?Hatcheries are large facilities that raise chicks and then sell them when they are one day old to the egg industry and poultry industry. For the purpose of this piece, I will focus solely on the egg industry. Most egg-laying farms, even the ones who sell eggs to Whole Foods, obtain their chicks from hatcheries. What happens in hatcheries? It is common practice for all the male babies, in the egg industry to be killed. Why are the males killed? Let?s look at this image. 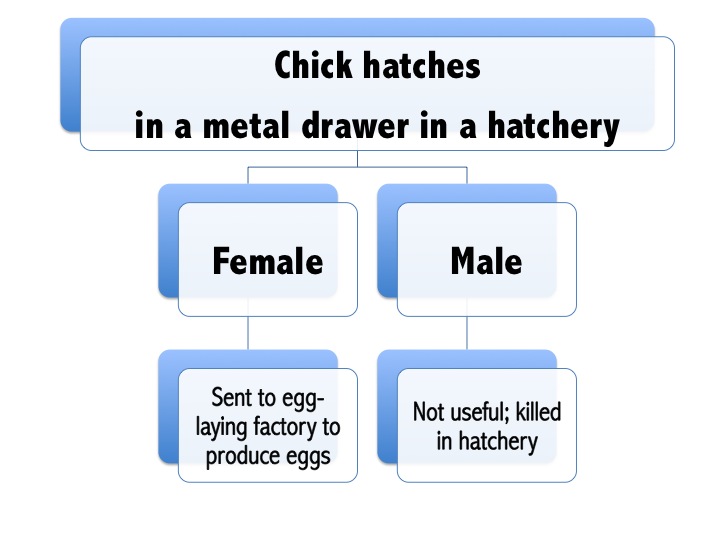 There are two reasons both having to do with their lack of value: 1) They are males so they won?t lay eggs. 2) They are not bred to produce excessive flesh for the meat industry. So as a result, they are killed. 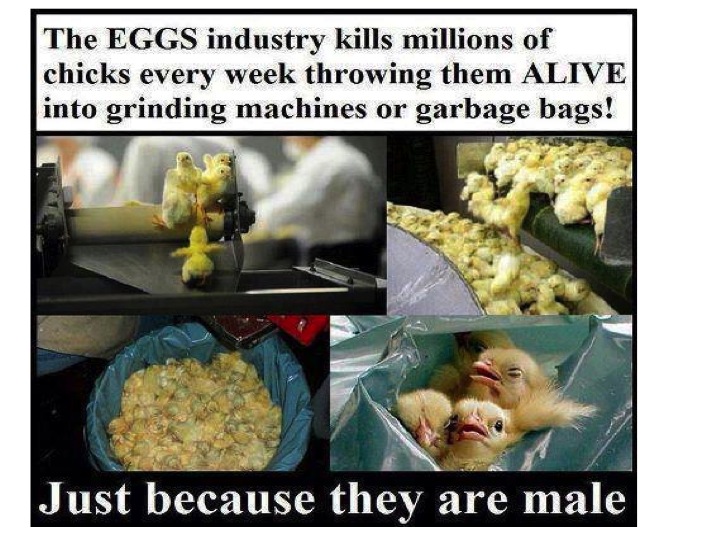 Every day in the US, more than 500,000 male chicks are ground up alive in machines, have their necks broken, are gassed or tossed into bags to suffocate. This is standard practice, within the bounds of animal welfare laws, and is even part of the practices at egg manufacturing companies that sell to Whole Foods and have labels such as organic, humane, and cage free.

I am often asked why I also do not consume fish. Studies have shown that fish and other sea creatures are sentient, have social relationships, are able to feel pain. 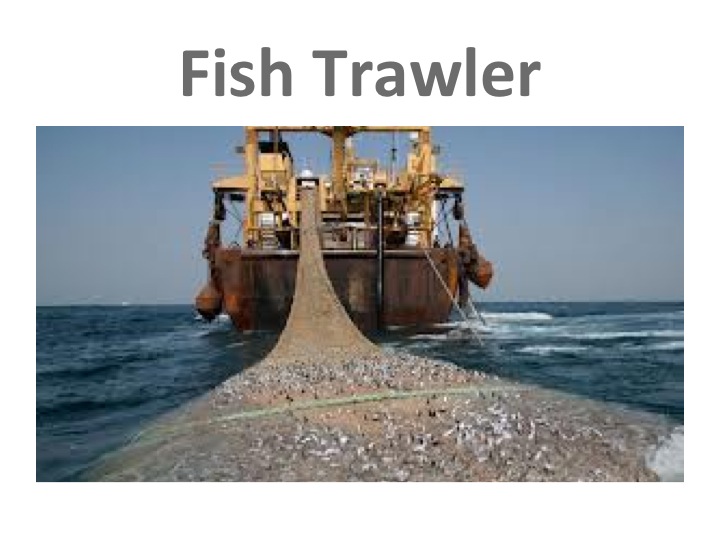 The consumption of shrimp is devastating to aquatic life as trawlers are employed to cut along the ocean floor taking in 800,000 pounds of fish in a single outing including dolphins and turtles. 70% of what is picked up is thrown out. 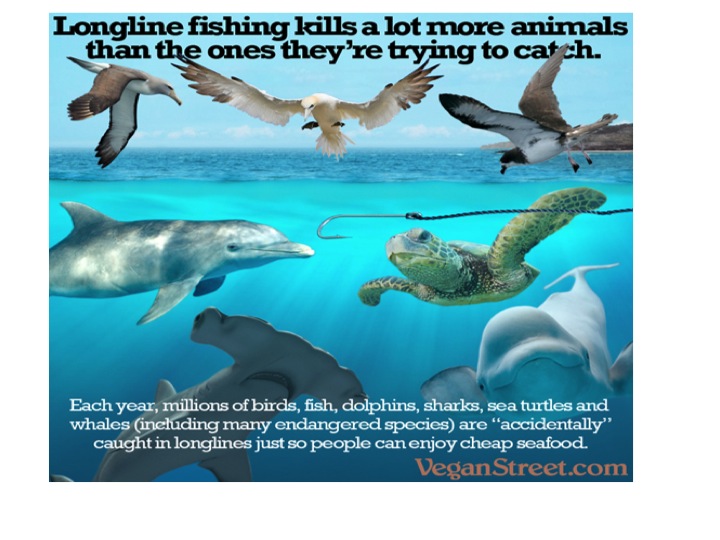 Long-line, fishing which employs thousands of hooks, is also devastating to avian an aquatic life. Almost 200,000 birds die on these hooks each year worldwide. Finally, one quarter of all fish consumed today is farmed. The huge concentration of fish in a small pen increases their discomfort, disease and deplorably unnatural conditions.

?And then finally there is the issue of slaughter. 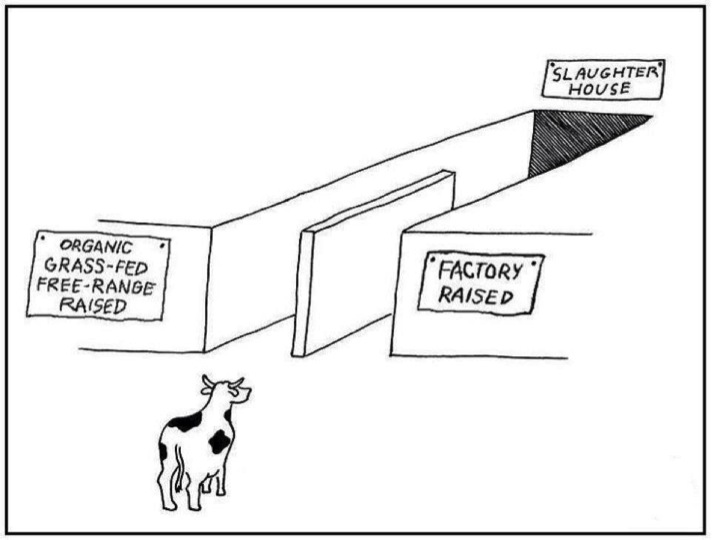 In order to legally sell meat in the US, the animal must be slaughtered in a USDA approved facility. It is too expensive to have one of these facilities on many farms so most animals whether sold at Whole Foods or not, raised humanely, organically or conventionally are transported, often long distances, to a slaughterhouse. Animals such as chickens, pigs and cows experience rough handling, confinement, broken arms and legs and starvation. For as long as three days, food and water may be withheld to avoid soiling of the truck, to avoid spending money on food which will not be converted to meat and to empty the animals? bowls in order to lower the chance of fecal pathogen contamination at slaughter. Additionally, in order to keep costs down, heating and cooling are not provided. Many animals die during the transport from the strain of the journey. 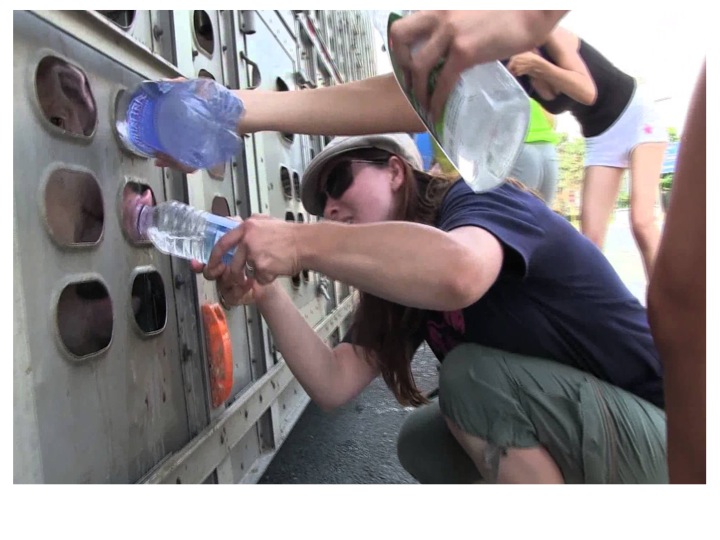 This is a picture of some compassionate people waiting at a stop light just outside a pig slaughter facility. They are taking advantage of the moment, before the truck moves on, to give some water to the starving and thirsty animals. And then of course there is slaughter. Animals are conscious, aware of danger and frequently feel both pain and terror in the slaughterhouse. They have a desire to live. When I allow myself to think about this, I find it haunting. However, I feel hopeful when I read words like these. 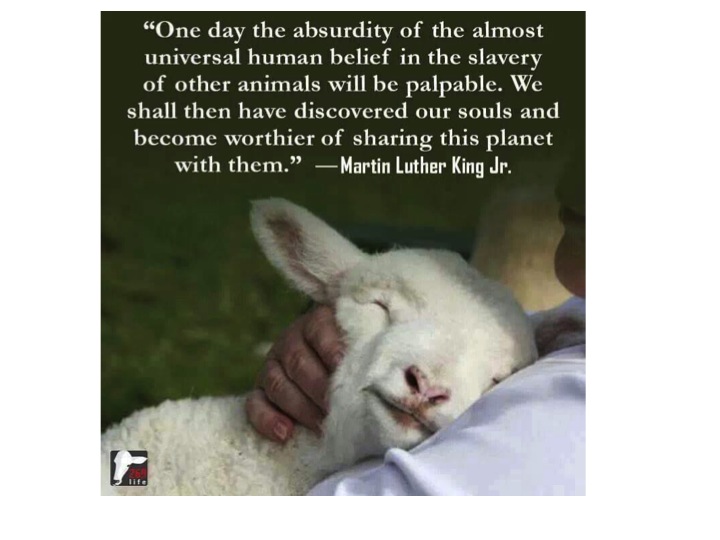 I?ll just finish this section by highlighting?some of the diets throughout history. 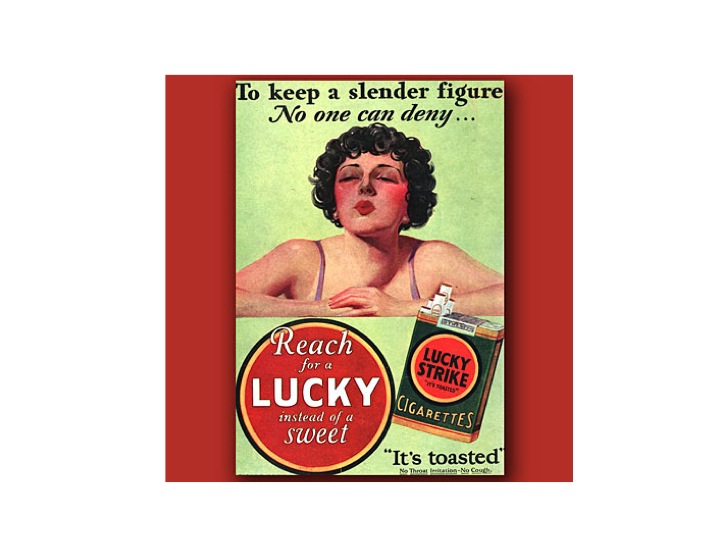 There have been some crazy ones such as the Cigarette Diet of the 1920s that recommended replacing dessert with a cigarette. 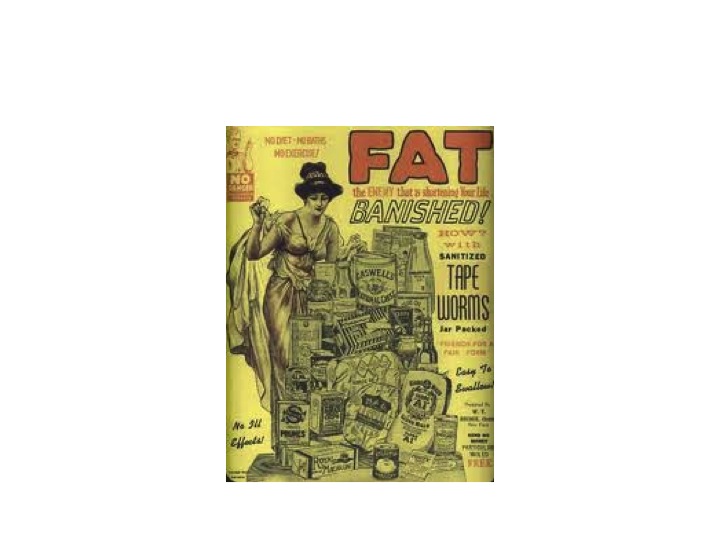 Then there was the Tapeworm Diet of the 1950s that recommended ingesting parasites to lose weight. 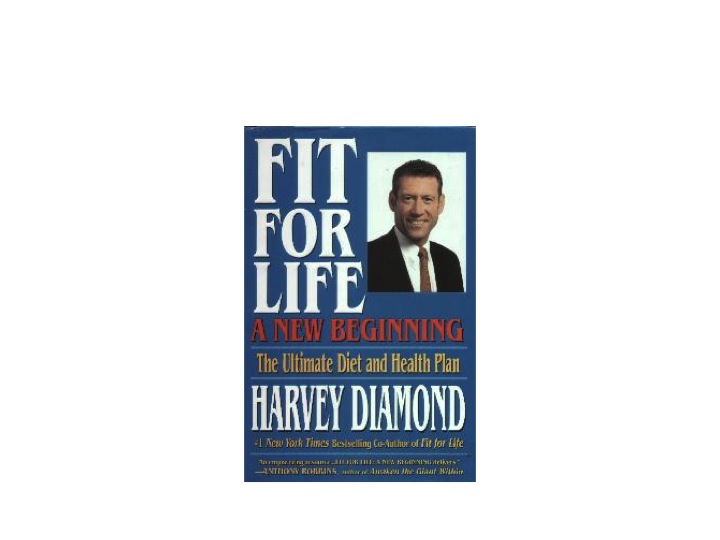 Or how about the Fit For Life Diet of the 1980s that prohibited complex carbohydrates and proteins from being eaten at the same meal? 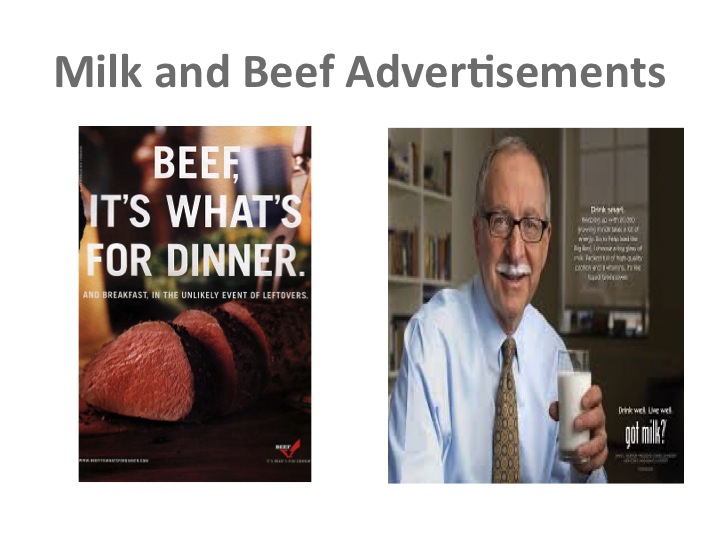 I wonder whether there will be a time that we look back on the Standard American Diet that wreaks havoc on the environment, burdens the health-care system and causes tremendous suffering for humans and animals alike. Will we shake our heads in wonder? I think this wise soul said it best: 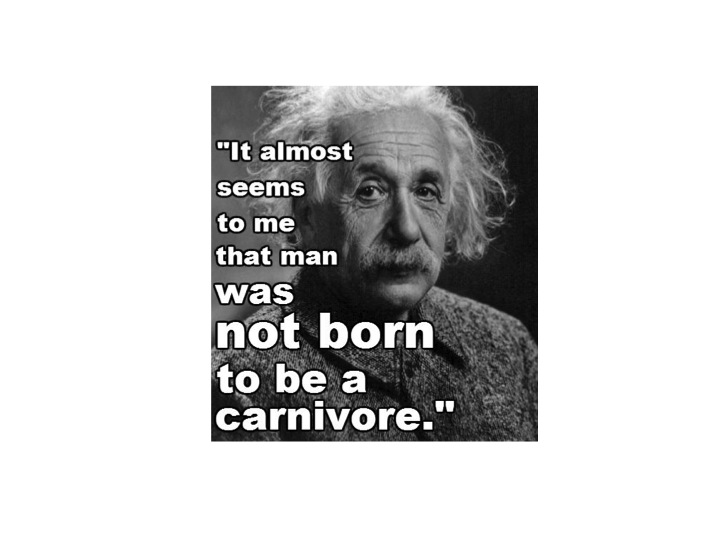 Thank you so much for visiting this page!